Game? Art? Or both? Digital and… physical? Unravel an intriguing universe that mixes platforming, action, and puzzles, and experience an adventure with a unique aesthetic. 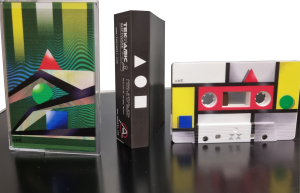 /\O[] is a platform and puzzle game for the ZX Spectrum and MSX, inspired by Mondrian‘s paintings, and Kandinsky‘s basic shapes.

The latest production by Paulo Andrés, author of the acclaimed Devwill Too ZX and Virgil’s Purgatory, embraces the graphic limitations of these machines, transforming them into abstract production tools.

With the same determination, we converted the cassette tape, an obsolete media, into an object of art. We went even further, and recast the acrylic box as a canvas.

This magnificent cassette, born from the partnership between Teknamic and Edisco, and from the artistic talent of Amaweks, contains both versions of /\O[] for the ZX and MSX platforms.

The digital version is available for free at this link: https://amaweks.itch.io/tcq

The initial idea for this game came from dialogues I had with my friend Luiz Souza. We were talking about what Anachronic Art would be, he was writing and rewriting the final version of our Anachronic Art Manifesto, and Kandinsky was always coming up in the conversation. From our dialogue came the idea to make an abstract game, and more than that: to create a whole fiction that the concept of the game would have been created by the abstract painter himself.

I’ve made some graphical mockups that could compose the game, and then Luiz Souza wrote a story where his fictional Kandinsky died as a junkie in the late 80’s and influenced some underground game developers. In the end, I had to change many things about the game: the aesthetics of Mondrian’s art suits better with the technical limitations of the microcomputers of the 80s, and the exercise of fiction regarding authorship had already been carried out in Luiz’s short story. The game still is somewhat related to literature through the encrypted text that comes with the physical edition inserts.

A few years ago, when I found out about the ZX Spectrum (1982), I believe around 2014, my pixel artist self fell in love with that color palette and the famous (or infamous) “Colour Clash“. It’s just that in the ZX, economical in all technical aspects, there is no memory space for sprite color information (the objects that move freely around the screen), and these borrow the colors from the graphic blocks in the background (generally composing the scenario).

This is the third game I develop for the ZX. In the first one, Devwill Too, I tried to use 8×8 blocks completely filled with color to create colorful backdrops and avoid showing the “Color Clash”. I heard praise from people who found the graphic style interesting because of this. In the second, Virgil’s Purgatory, I tried again to use the blocks in this way, going a step further, with the details of scenarios drawn with these large cells, blocks of 8×8 pixels, and graphics in black, grey, white, and red.

But in /O[] I finally achieved the main objective of using the “Colour Clash”, at first a limitation, a flaw, as a graphic effect of light, shadow, layering, simulation of automatic scrolling screen, and general aesthetics about the game. Speaking of which, the aesthetics (not to be confused with the true meaning of the word cosmetic) is conceived in such a way that each canvas forms a frame, an abstract canvas in motion. As Luiz Souza accurately evaluated: “you think about colors like a painter and apply them like a game designer”. As already mentioned, the canvases were strongly inspired by the paintings of Piet Mondrian, although the basic shapes were also left from Kandinsky: the circle, square, triangle, line and point.

I continue to seek to enrich the video game I produce with cultural elements from all places, from all times, in anachrony, which as Luiz Souza concluded, regarding our Anachronic Art Manifesto, first dismantles and fragments time, understanding each one of its elements in its historical moment, to reassemble these fragments in a cohesive, conscious and critical way.

Without more to say, I hope you can play /O[] and have fun, enjoy, take what suits you from the experience.

Latest news
We use cookies on our website to give you the most relevant experience by remembering your preferences and repeat visits. By clicking “Accept All”, you consent to the use of ALL the cookies. However, you may visit "Cookie Settings" to provide a controlled consent.
Cookie SettingsAccept All
Manage consent

This website uses cookies to improve your experience while you navigate through the website. Out of these, the cookies that are categorized as necessary are stored on your browser as they are essential for the working of basic functionalities of the website. We also use third-party cookies that help us analyze and understand how you use this website. These cookies will be stored in your browser only with your consent. You also have the option to opt-out of these cookies. But opting out of some of these cookies may affect your browsing experience.
Necessary Always Enabled
Necessary cookies are absolutely essential for the website to function properly. These cookies ensure basic functionalities and security features of the website, anonymously.
Functional
Functional cookies help to perform certain functionalities like sharing the content of the website on social media platforms, collect feedbacks, and other third-party features.
Performance
Performance cookies are used to understand and analyze the key performance indexes of the website which helps in delivering a better user experience for the visitors.
Analytics
Analytical cookies are used to understand how visitors interact with the website. These cookies help provide information on metrics the number of visitors, bounce rate, traffic source, etc.
Advertisement
Advertisement cookies are used to provide visitors with relevant ads and marketing campaigns. These cookies track visitors across websites and collect information to provide customized ads.
Others
Other uncategorized cookies are those that are being analyzed and have not been classified into a category as yet.
SAVE & ACCEPT
Powered by