Toxic alien birds known as Ornithoids, threaten the Earth! It’s up to you, Humanity’s last line of defense, to face them in this electrifying shoot’em up!

The origin of the so-called Ornithoids is unknown and tramples over our sciences. Despite some popular outcry in favour of the new species, their countless number and radioactive toxicity make coexistence in our environment impracticable.

Though little we know about these beings, we have uncovered that they are in fact belligerent. They possess good memory, hearing, and adaptability. Added to their offensive through deadly beams, they can teleport themselves across short distances – among other skills never dreamt of. It is best not to underestimate them, for when they feel outsmarted they will behave like nothing ever seen in the natural world.

Little by little they’re becoming the masters of all Earth, but it’s in the highest altitudes where they paradoxically seem to become more vulnerable. We know also that they’re able to count up to four. Even if none of this sounds useful by now, that’s all we are able to tell you.

Communication was impossible. Their quasi-indestructibility challenged our capabilities to design this defensive action. Duty comes to summon you in the last minute to assure our survival. There will be no parley and there will be no glory. Traitors and defectors shall be punished severely; this is our hour of need, the apex of a calamity. There will be no time for anything but bravery beyond the gates of this hangar. Embrace your fear! 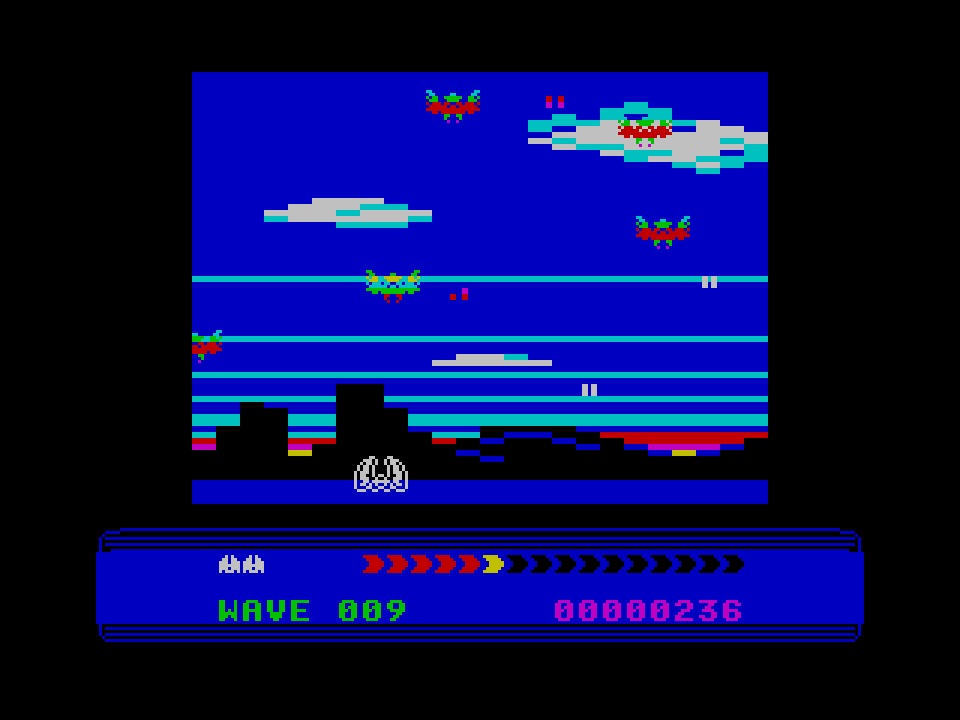 The present version of Laserbirds was designed for the classic ZX Spectrum 48K/ZX Spectrum Plus. It won’t work properly in 128K models. Its functioning on clone equipment also cannot be guaranteed. It also works on the new ZX Spectrum Next as long as in 48K mode and refresh rate set at 50 Hz, using VGA or RGB.

Press “1” in the presentation screen for Kempston start, “0” for keyboard. Keys can be redefined and default to QAOP-Space.

Guide your vehicle to aim at the creatures. Keep the fire button pressed for rhythmic shooting. Release the button to cease fire. The player is allowed to fire two shots, after which at least one will have to go out of reach before another can take its place. The use of joysticks is strongly advisable as it may extend your equipment’s life span, moreover providing the best from this experience.

Each dead creature scores you one point. Every hit on the Alpha creatures is also worth one point. A bonus vehicle will be awarded every 500 pts. If your score is high enough you’ll be welcomed to the hall of champions. To achieve the highest score, however, the player must take on the challenge and go beyond 129 stages.

We would like to thank Chris Cowley (Beepola),  Jonathan Smith (FuzzClick) and Claus Jahn (ZX Modules).
Special thanks to Clive Townsend (text revision). 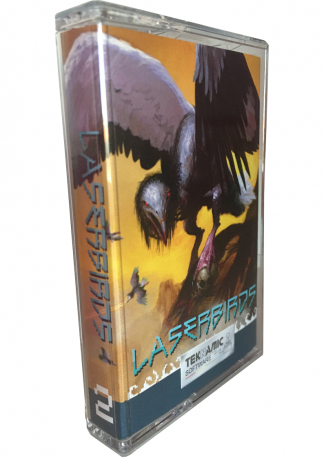 You're viewing: Laserbirds €8,90 with VAT
Add to cart
We use cookies on our website to give you the most relevant experience by remembering your preferences and repeat visits. By clicking “Accept All”, you consent to the use of ALL the cookies. However, you may visit "Cookie Settings" to provide a controlled consent.
Cookie SettingsAccept All
Manage consent

This website uses cookies to improve your experience while you navigate through the website. Out of these, the cookies that are categorized as necessary are stored on your browser as they are essential for the working of basic functionalities of the website. We also use third-party cookies that help us analyze and understand how you use this website. These cookies will be stored in your browser only with your consent. You also have the option to opt-out of these cookies. But opting out of some of these cookies may affect your browsing experience.
Necessary Always Enabled
Necessary cookies are absolutely essential for the website to function properly. These cookies ensure basic functionalities and security features of the website, anonymously.
Functional
Functional cookies help to perform certain functionalities like sharing the content of the website on social media platforms, collect feedbacks, and other third-party features.
Performance
Performance cookies are used to understand and analyze the key performance indexes of the website which helps in delivering a better user experience for the visitors.
Analytics
Analytical cookies are used to understand how visitors interact with the website. These cookies help provide information on metrics the number of visitors, bounce rate, traffic source, etc.
Advertisement
Advertisement cookies are used to provide visitors with relevant ads and marketing campaigns. These cookies track visitors across websites and collect information to provide customized ads.
Others
Other uncategorized cookies are those that are being analyzed and have not been classified into a category as yet.
SAVE & ACCEPT
Powered by